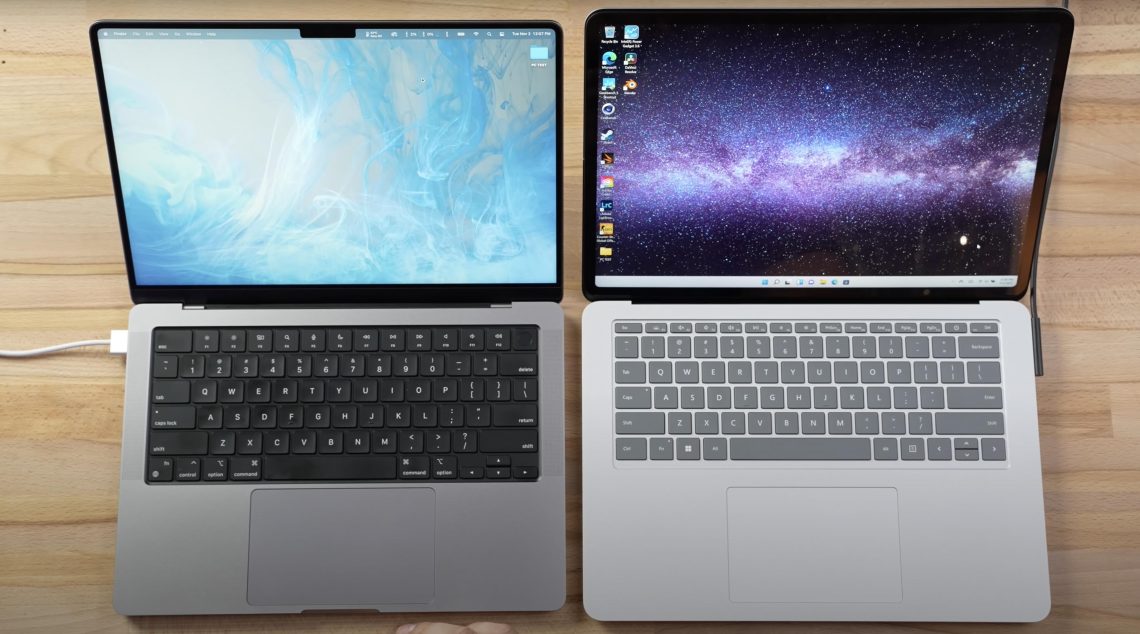 Although Microsoft was established a year earlier, Apple has managed to solidify its reputation as one of the more innovative tech brands in recent years, thanks to its unique range of devices.

Both Microsoft and Apple are now two of the leading names in the industry, constantly creating new products that rival each other.

Picking between the two models can prove to be a tough choice for users, as both laptops offer different features at similar price points. So, what exactly are their differences? Moreover, which is the better choice for you?

To help you out, this article has listed down all the differences between these two models, ranging from their design and dimensions to their overall performance.

A big thanks to MaxTech for the information provided in the blog. Please go subscribe to them, they are amazing!

To start, let’s take a look at their dimensions and overall design. Apple’s new MacBook Pro has retained its signature Silver aluminum look that made it famous among users, although you can now find it in another color – Space Gray.

This new version is also slightly heavier than its 13-inch predecessors, weighing around 3.5 lbs. However, it retains its usual thickness at 0.61 inches. It also comes with a new keyboard, called the Magic Keyboard, designed to make typing easier and more comfortable.

Meanwhile, Microsoft’s offer is slightly thicker and heavier than Apple’s new MacBook Pro, weighing around 4 lbs with a thickness of 0.7 inches. However, the Surface Laptop Studio offers something slightly different in terms of design.

The Surface Laptop Studio comes with two hinges that give the laptop more versatility. One hinge allows you to open it as a regular laptop, while the other enables you to pull out the screen for better viewing angles and use it as a tablet.

Both laptops offer fantastic high-resolution displays that allow users to immerse themselves in what they’re viewing. However, only the Surface Laptop Studio offers a touchscreen capacity, adding another level of personalization to your regular PC use.

Although it has a lower resolution, the Surface Laptop Studio has a built-in sensor that allows it to easily track the Surface Slim Pen 2 when used as a tablet. This gives it better friction when writing or drawing, perfect for those who want an easier time writing.

It can be tough to compare the performance, especially considering the two models use different operating systems – Windows and macOS. However, both models come with their respective companies’ new processors, allowing them to deliver powerful performance for every task.

The new MacBook Pro comes with Apple’s new M1 Pro chip that has six performance and two efficiency cores, a total of eight cores for just processing. This new chip has been proven to handle even the most heavy-duty processing tasks with ease and efficiency while maintaining the laptop’s battery life.

In contrast, Microsoft’s new model comes with its signature x86 Intel processor, now in its 11th generation. However, it only comes with four cores as opposed to the more popular eight. Nevertheless, this laptop still manages to deliver a solid processing performance and hold its own against Apple’s new chips.

Battery Life, Ports, and Others

In terms of battery life, the Surface Laptop Studio offers up to 18 hours’ worth of use on a single charge. In comparison, the MacBook Pro is said to deliver around 17 hours before needing to recharge.

Aside from the battery, the MacBook Pro offers more ports to users than the Surface Laptop Studio, with the former having three Thunderbolt 4 USB-C ports, a full-sized SD card slot, a MagSafe3 charging port, and an HDMI port. It also comes with a jack for 3.5mm headphones.

Meanwhile, Microsoft’s laptop comes with only two Thunderbolt 4 ports, only one Surface Connect port, and a headphone jack. If you need additional ports, you’ll have to purchase a separate USB hub.

Both laptops undeniably represent the best each company has to offer, further reinforcing why Microsoft and Apple are the two most notable names in the tech industry.

However, which of the two is better? Well, while their specs and features differ and the two models tend to alternate when it comes to outperforming each other, both are excellent choices for those looking for high-quality laptops.

So, you can never go wrong with either model; the final decision ultimately depends on your preferences as a user.

A big thanks to MaxTech for the video review: