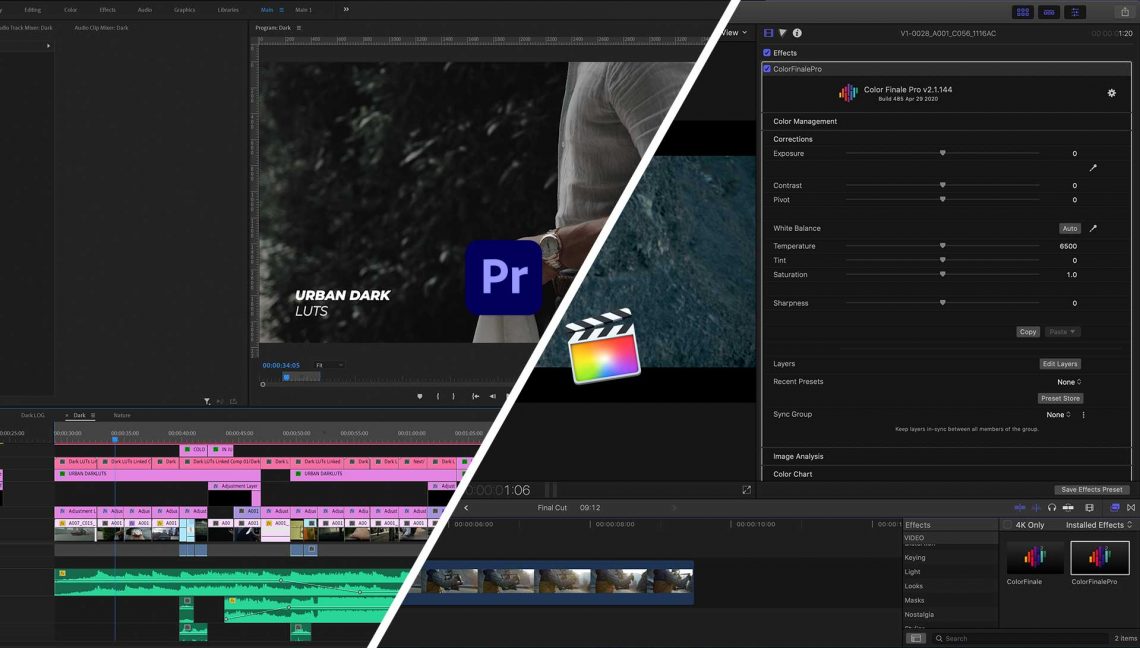 When it comes to video editing, the classic Final Cut Pro X vs Adobe Premiere Pro feud still stands. They are both incredible video editing software but of course, they have some specifics.

Even though there are a ton of other options, such as DaVinci Resolve, Avid, Filmora and even After Effects that can fulfill the same purpose, the top seems to be owned by Apple and Adobe.

I’d say that it’s the time to go ahead and see the differences and similarities between them, and maybe try to choose a winner.

Apple’s Final Cut Pro X is right now, only available for Mac users. Besides, in order for it to run smoothly, you need at least 8GB RAM, at least macOS 10.13.6, and a decent graphics card with at least 1GB VRAM.

Adobe Premiere Pro, on the other hand, is available for both Mac and Windows users, and its system requirements are a little higher. This is not necessarily a problem, because most Windows-based devices have somewhat better specs. In order to smoothly run Premiere Pro, you need at least 16GB RAM(it works decently even with 8, but it may crash), an Intel I5 or Ryzen 5 processor, 2GB VRAM (although I used it on an integrated graphics card and worked fine), a decent sound card and a screen resolution of at least 1280 x 800.

If you want to use a VR headset with them, your computer also needs SteamVR and of course, much better specs in order to run it.

At this category, the winner is without a doubt, Adobe’s Premiere Pro.

One of the most important things you need to consider when choosing a video editing software is the library and how you can work with it in the fastest way.

Adobe Premiere Pro has a very interesting system to organize your files, everything going in folders and subfolders for easy access, as well as color tags in order to have everything structured.

Final Cut Pro X on the other hand, has all those features, but it’s also adding keyword tagging on top of that. This can be incredibly useful, as you can simply type in the key you’re looking for.

This one is won by Final Cut Pro X, for the great accessibility.

Of course, you want the video editing software you use to support all the possible formats. Both of these them can load RAW videos shot with basically any camera, from Nikon, Canon, and Sony, to iPhone. They both require to have the codecs installed on your computer, and will also load XML files exported from each other.

When it comes to supported formats, it’s impossible to determine the winner, as they both do the same thing.

The way you interact with your video editing software is crucial. You need to have everything on hand, and also to be able to move and change everything you’re not comfortable in.

Adobe Premiere Pro has a very intuitive interface, making everything very easy to understand. Whenever you create a new timeline, the video and sound will go on different tracks, thus allowing you to separately edit them. In the Premiere Pro editor, you can also have Nested Sequences, Sub-sequences, and Sub-clips to help you keep everything organized.

Even more, the Premiere Pro interface is ultra customizable, and you can drag and move your tabs however you want.

On the other hand, Final Cut Pro X uses this Magnetic Timeline, that can be considered easier for beginners and a pain for experienced editors, and also allowing you to create Roles, which are descriptive titles for your files, Auditions, for easy grouping, and Compound Clips, that are just like Premiere Pro’s Nested Sequences.

Final Cut Pro has a simplified timeline and user interface and Premiere Pro is much easier to use and designed better.

In this category, we’ll say that Premiere Pro is the winner because even though they do the same thing up until one point, it’s a lot more customizable.

If you want to take your edits a step further, you may be interested in also using a motion graphics engine, and create more interesting things.

Premiere Pro has the advantage of being able to communicate with the amazing After Effects, which is the standard in the video editing industry. Even though it’s a little harder to work with, it can create impressive things.

Apple’s Final Cut Pro X works well with Apple Motion, which is a great tool if you want to create transitions and titles, and it’s a lot easier to use, especially if you’re already used to Final Cut Pro X.

In this category, the winner is Adobe’s Premiere Pro for its integrations with After Effects.

Any video editor wants to export his videos as fast as possible, so let’s go ahead and see what are the main differences between these two.

The biggest advantage of Apple’s Final Cut Pro X is the render time. It’s one of the fastest possible and can render a five minutes video in under two minutes.

Premiere Pro, on the other hand, can take a while to render a simple video, and that depends a lot of your machine’s specs. To make a short comparison, my laptop will render a 30 seconds video in about three minutes, since it’s a simple, cloud-based machine, while my desktop computer will render it in a matter of seconds.

For a casual video editor, Final Cut Pro X is basic. It’s very intuitive and you can create quick edits easily. Premiere Pro on the other hand, is considered to be much more comprehensive and easier to use. If you are a professional, you may want to choose it, along with its integrations with After Effects.

Final Cut Pro X wins this one, without a doubt.

Price is a very important factor too when choosing a new software.

Right now, Final Cut Pro X stands at about $299.99 on the Apple Store, and it’s a one time purchase.

Premiere Pro is available through a Creative Cloud subscription of $20.99/month, which can end up a little more expensive than FCPX.

Price-wise, it depends what you are comfortable paying.

It can be tough to choose a video editing software you are comfortable with, but there are many options out there. Now you have the info you need about Final Cut Pro X vs Adobe Premiere Pro, and can make a decision.