Adobe After Effects vs Premiere Pro 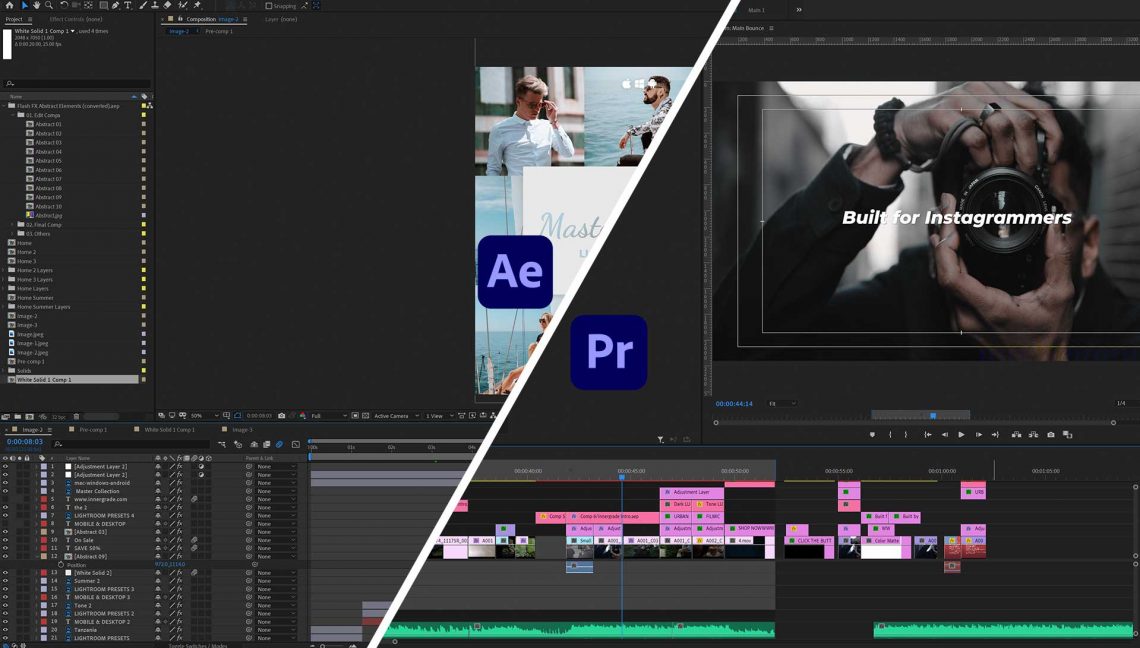 When it comes to After Effects vs Premiere Pro is not about how one is better than the other, but rather about how you can use one to create amazing effects for the other.

While Premiere Pro is an amazing video editing software, After Effects was built to handle special effects, which can be very helpful when you want to create impressive motion graphics.

Of course, you can use After Effects for video editing too, and for me, this is the best choice. For a long time, I didn’t even touch Premiere Pro, but it is a little difficult and can be considered counter-intuitive.

Let’s first talk about Premiere Pro, and see what’s specific to it, and where it starts becoming limited. Also, if you want to learn more, check out our expert guide on all the basics of Premiere Pro.

As I said, Premiere Pro is a video editing software. Non-linear editing software to be exact. Anyone can use it, all you need to do is drag and drop footage and effects, and create amazing clips. You can edit both video and audio clips, place effects and transitions and use adjustment layers and color correction tools where needed.

After Effects is a digital motion graphics platform. With it, you can create animations and complex sequences. This is the standard for motion graphic artists, and by using the complicated layers and keypoints, they can create incredible visuals.

We should take a look at the key differences between these programs.

After Effects vs. Premiere Pro

Premiere Pro’s interface is considered a lot easier to use than After Effects’. Everything is right there and very straightforward, so you won’t have any problems when it comes to creating a new sequence, editing it, trimming clips, and so on.

Premiere Pro uses a timeline of tracks where you can place multiple videos within one track.

After Effects uses a layered timeline system. This means each individual clip will be it’s own track. You can see in the example below.

In After Effects, if you want to use an element, you first need to create a composition and add your footage and elements and then edit them using the keyframes.

If you’re looking for a casual software to edit your videos, then Premiere Pro is the way to go. You’ll learn everything there is to know about it in no time, and additionally, you can check out some Premiere Pro tutorials to get a better idea of it.

One of the main differences between these two is the audio editing option. In Premiere Pro, the audio and video are separated upon import, so you can freely change, replace, and even fix them.

After Effects, on the other hand, doesn’t have this feature and all you can do is change the volume of that track. Of course, at this point, you can use them together, and you will be able to work on both sound and special effects.

This is one of the categories where Premiere Pro doesn’t stand a chance, but chances are, you won’t really need it. In After Effects you can change basically everything, from using the specific tracking tool to remove and change options, to even using the wire removal tool to hide all the cords and harnesses used in stunts.

Both these programs can create masks on any footage, but After Effects does it much better. It has a lot more precision, easier to use and you can track that mask through every frame of that scene. You can also bezier the keyframes in After Effects, where Premiere Pro doesn’t allow this. This allows you to get a smooth transition between keyframe movements.

If this is not something you usually need to do though, then you can probably use Premiere Pro for it and quickly create your video!

When it comes to viewing multiple cams at once, Premiere Pro is the one to get the job done. Since it was created purely for video editing, it gives you the possibility to watch multiple videos at the same time, thus creating amazing edits.

This is the specific of After Effects. In marketing agencies, for example, the graphic designers send the Photoshop files to the motion graphic artists, and then they create the animations. You can’t do this in Premiere Pro, so if you’re looking to create any animations, using logos, graphics or text, then you should consider After Effects.

Which One Do You Need?

Well, technically speaking After Effects does everything Premiere Pro does, but in a more complicated way. The matter is simple. If you need to create simple edits, wedding videos, and YouTube videos, then you should go ahead and start using Premiere Pro. This is because Premiere Pro uses a simplified timeline that works easier for creating videos in sequence. The layered system that After Effects uses would be generally harder to create long length sequences, but easier to create layered effects and titles.

If you want to create animated graphics, comics or special effects, then you should choose After Effects.

There isn’t a feud between After Effect vs Premiere Pro, and they can easily work together through Adobe’s Dynamic Link, in order to use the functionalities of both when you need to.